How we saved a family with the business of fashion. 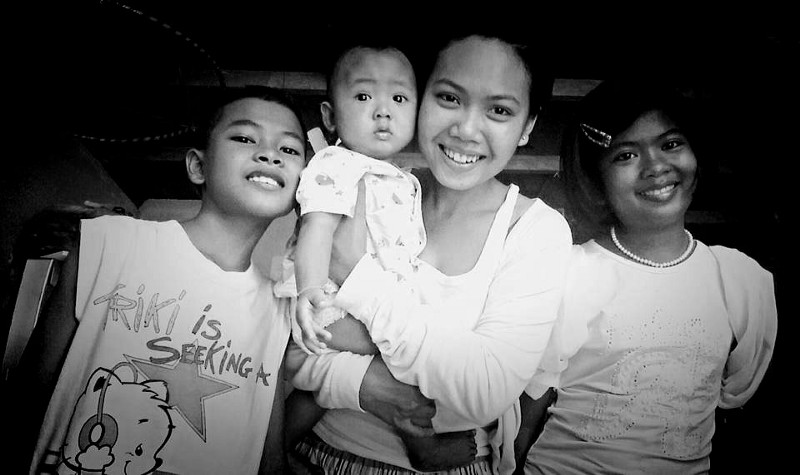 I had been to most countries in South East Asia, mostly before the age of 11, but it wasn’t until 2012 that I first came to Cambodia.

I was looking for a new creative challenge and I discovered a country run by charities. Most were producing fashion accessories: all the handbags, zip-ups and totes had similar designs, made from the same materials with varying degrees of design quality. My initial goal was to connect with these non-profits and offer my design consulting services: little did I know that this was the beginning of a much more meaningful journey with a much larger mission. Rather than serving my own creative purpose, my creativity was intended for much more meaningful connections.

On my very first trip to Cambodia, my good friend and fair wage advocate, Kate Larsen, introduced me to Thearith Soun. Kate had embarked on a venture selling tailor-made eco-friendly shirts, and I was advising her in this process. She had found a skilled tailor in Thearith who was living in a leaking HIV ghetto in south Phnom Penh with her 20-year-old daughter Meimei. The women had managed to find sewing machines and created a seamstress cooperative. The ghetto was built on a piece of property owned by a wealthy resident, but the shanties were held together with tarps, which collected rainwater and leaked onto the sewing machines.

Kate took it upon herself to sponsor the rent of a proper building where Thearith, Meimei, and other women could work and keep their sewing machines safely. A Fair-trade marketing organization called Craftworks Cambodia started to bring in orders to this team of women, and it seemed like things were looking up for them. I was also giving them orders for cloth pouches to house the jewellery I was making now with local brass smithing artisans.

The importance of listening

As I grew closer to the families I was working with, I soon realized that a design venture is not just about the design, the brand message, or neatly composed Instagram photos: it also became about the relationship I established with these families. Quite early on, the vast disconnect between our suppliers and the consumers that we sell to had become evident.

After working with Thearith and her team on and off for two years, I realized that these women were still struggling to make ends meet. Kate still sponsored the rent, and orders were trickling in, but it still wasn’t enough. As I spent more time listening to Thearith and Meimei, I realized that other obstacles were trapping them into poverty:

1. Due to HIV, Thearith was ostracized from normal working environments. As such, she is forced to rely on erratic, small orders while working from home.

2. Even though Meimei helped with the sewing and errands, if one of them got sick, then any savings were spent on the expensive and malfunctioning health care system.

3. Working from home restricted them to local customers who can only afford rock bottom prices in a fierce economy. While working long hours, their income remained minimal, barely covering their expenses, and as a result, profits were almost non-existent.

4. Without profits, they started to accumulate debts: handphones or motorbikes had to be pawned, and interest rates began to accumulate, creating more debt.

These factors lead to an ongoing problem, or what is known as the poverty trap. According to Investopedia, a poverty trap is generated when an economic system requires a significant amount of various forms of capital in order to earn enough to escape poverty.

Thearith is a respected member of the HIV community, and while trapped in poverty, most believe she is better off than most since she can live and work rent-free.

Given these beliefs, a small group of distant relatives and community members brought a dishevelled orphaned girl with HIV to Thearith. The child’s name was Nich, and she had been living in the streets. Thearith took her in, cleaned her up, and within a month, they all grew attached to one another. However, not surprisingly, there were not enough resources to feed another mouth, so they had no choice but to take her to a care centre.

As I began to visit them more, I started listening to their story. As the saga unfolded before my eyes, it reminded me of my own desire for a family and belonging.

How could I deny a child a home when I was searching for that very thing myself?

The only thing that stood in the way was a couple of dollars a day. I firmly believe kids should grow up in families, not institutions: it was a no-brainer. I asked how much money was needed to bring her home and donated the first three months worth of food. Then Kate and I launched a Causevox campaign.

The need for perseverance

We needed legal papers to officialize Thearith as Nich’s caretaker, so I embarked on an epic journey to Nich’s small village. We drove three hours north, stopping at a market selling fruit and fried spiders. In a dirt road village of wooden homes, we met with two distant relatives: the village chief and the community head. The policeman, who had brought Nich to Thearith, showed us his humble wooden stilt home. He showed us why he could not take care of Nich: his own mentally disabled daughter. It was harrowing to see the girl sitting in the middle of the room, blankly smiling, oblivious to everything.

His own poverty trap already overwhelmed him.

There were no birth certificates, so we started there. I suddenly held papers in my hands that proved the existence of two people, Nich and her little brother Phai, who was still roaming the streets. They would otherwise fall through the cracks of a society still recovering from war and a chasm of other injustices.

Those papers felt like I was holding two lives in my hands.

The village chief knelt down on the tiled floor of his house, which was the only tiled house in the village. He wrote a letter under which thumbprints were placed by the two remaining relatives. These papers now confirmed that they agreed to hand over the responsibility of Nich and her brother Phai to Thearith.

The community head took the same action, and we were set. We drove back with an uncle and Phai. Wide-eyed, he agreed he would stay in his new home provided that his sister would be joining him. However, getting Nich out of the centre was a drama I had not foreseen. The (western-run) centre holding Nich was incredibly obtuse, insisting that they owned her and that Thearith could not care for her in her HIV state.

After many long emails to various child welfare charities, it seemed an impossibility that she would be allowed to leave the centre. Eventually, Nich took matters into her own hands and escaped! Since then, the four of them have been living together, as a family.

It has been three years since I first had Thearith and Meimei produce my jewellery pouches in their tailors’ cooperative. Today, my jewellery business, Emi & Eve, rents a three-floor house to accommodate our warehouse and office, as well as Thearith’s family. Meimei is now our country coordinator. My jewellery business sponsored the registration of Thearith’s cooperative with the ministry, and they are now a certified organization called Domlai Mon. This record allowed them to become members of Artisan Association of Cambodia, enabling them to take part in trade shows, as well as receiving mentoring and training.

Our mission for Mon, the label, is to differentiate our products from the many similar clothing and accessory brands offered in Cambodia while using the limited materials available with handwork detailing. This happens to be one of my favourite design challenges.

While we are doing better, challenges remain a daily occurrence as we try to find a constant influx of work for our cooperative of twelve seamstresses and crafters.

In hindsight, my initial goal of helping charitable organizations with design consulting became a reality after all, but in a much more meaningful way than I had expected. What I realized in the last five years is that it is not just about design: it is the investment in relationships that lead to ideas, creativity, and professional growth.